It’s finally out! I am pleased and honored to share that I have written an article about my Zentangle inspired, stamped and stitched ATC’s and miniquilt for the current December/January issue of Quilting Arts Magazine. Check out the cover and Table of Contents page here – http://www.quiltingdaily.com/blogs/quiltingarts/archive/2014/11/13/quilting-arts-magazine-dec-2014-jan-2015.aspx . 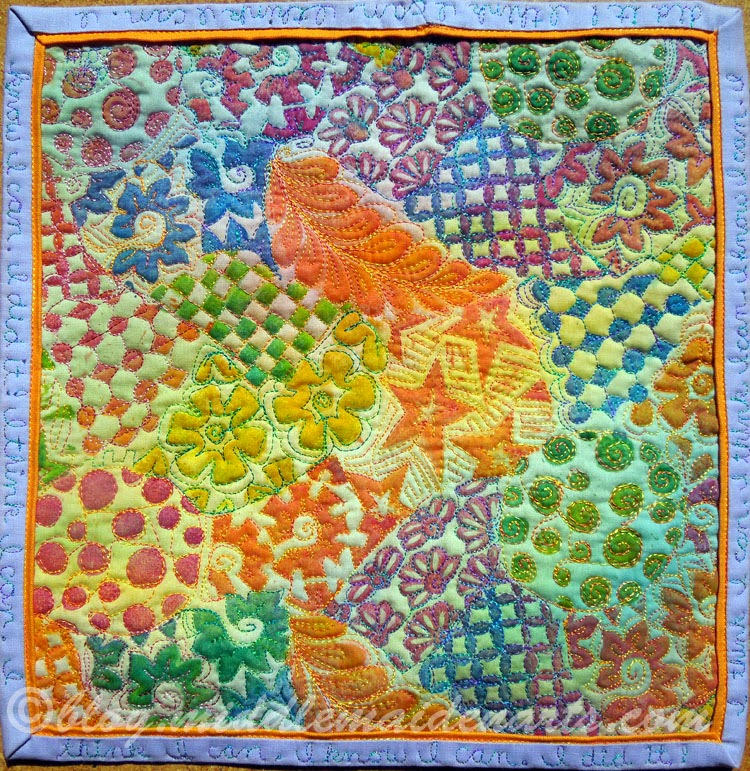 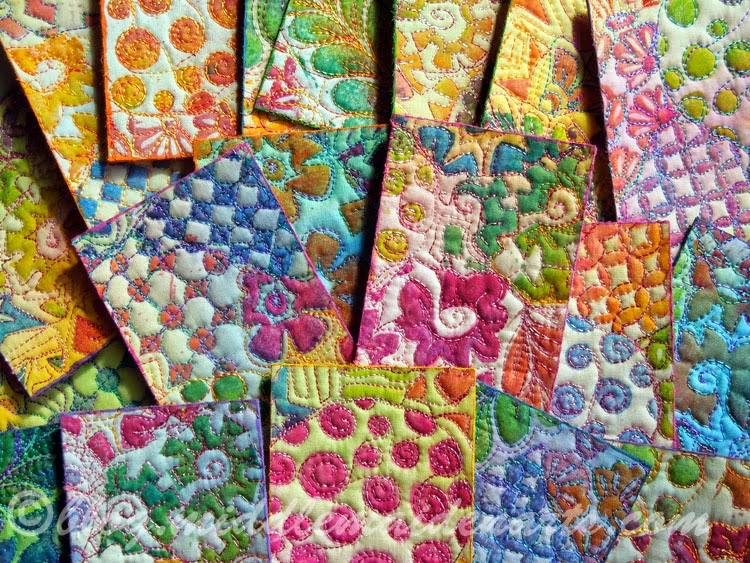 Susan (Sue) White grew up in the suburbs of Detroit, MI, the third of four children and middle maiden of her family, sandwiched between an older sister, older brother, and a younger sister.

Her dad, Ed worked for General Motors (GM) as a mathematical engineer. Involved in the early development of computers, Sue remembers when he brought one home, set it up on a dial-up modem, and got it to print out a picture of Snoopy (all in letters).

Ed was also involved in seat belt development for GM and showcased their effectiveness by warning the family before hitting the brakes as he was pulling slowly into their carport, “We all just folded over and popped back up,” Sue recalls, adding they all got the point.

Sue’s mom, Midge, has “the same love of learning and sharing new skills” that Sue possesses. Midge took classes every chance she could and has never accepted an “I can’t” attitude. “She just never puts up with that,” Sue explains.

From sewing and knitting to stained glass and jewelry; Sue developed the attitude, “If Mom can do it; I can do it.”

An “I Can” attitude, along with “encouragement, support, and the freedom to choose and live with your choices” are gifts Sue says her folks gave to all of their children.

“It’s important to me to pass along all of the gifts given to me,” adds Sue.

With six weeks “camping” by boat on the Great Lakes during summers, Sue grew to love the outdoors. A local cider mill became her favorite destination for birthday parties, followed by hiking in the county park.

Sue’s high school had a farm/nature center, as well as an environmental studies program; she was part of both. Each semester, they’d take a remote backpacking trip, and Sue loved it.

When she graduated, Sue enrolled at Northern Michigan University, hoping to continue along a similar academic path.

Sue led environmental field trips during one summer – including a 200-mile canoe trip into northern Canada; a trip to Utah to climb its highest peak, and a trip to the coast of Maine and New Hampshire. She planted trees in New Mexico, and another summer, completed an internship with the Forest Service. To make ends meet, she mowed lawns and weeded gardens, anything to keep her outside.

Sue graduated with a BS in Conservation, and accepted a graduate assistantship with Western Michigan University in the Department of Geography gathering digital data.

Accepted at the University of Montana as a graduate student in land use planning, she packed up everything that would fit in her car and, with just $400 to her name, headed out west toward Missoula, to look up an old friend.

At her friend’s suggestion, Sue put in an application for Clearwater National Forest and headed to Kalispell to visit other chums. While there, she received an offer to come and mark trees on a timber pre-sale crew. Though “not exactly sure what that meant,” Sue says “it was outside work” and she accepted.

Assigned to a remote “spike camp,” an hour past the Canyon Work Center, the rule was that they couldn’t hire just a single female to work with the crew; it had to be two. In a humorous twist of fate, the “other female” hired to work with Sue’s crew and bunk in her tent was, in fact, a young, man from Tacoma – one Tamee (Tam) White.

When Tam checked in for work, the oversight was realized, and another gal was hired to take that spot. Tam was sent to work with another crew

Sue and Tam didn’t meet until later in the summer and didn’t get to know one another until the crews moved in to the work center as winter neared.

By season’s end, Sue decided not to return to graduate school, and both she and Tam returned the following year.

Sue says Tam was a “creative go-getter” and “natural leader,” destined to run the crew. He also drove a “hippie-van” and motorcycle and with his love of the outdoors – the two hit it off.

In the spring of 1980, on Mt. Rainier -with a poem he penned on a piece of birch bark and a glass doorknob with a metal-fashioned ring in hand-Tam proposed to Sue.

The following fall, near Tam’s home in a small chapel on the Pacific Lutheran campus in Spanaway, WA, the two were married. Sue walked down the aisle hand tucked under her dad’s arm (with the glass doorknob hidden beneath as a surprise for Tam).
…
In 1987, Sue and Tam broke ground on their dream home. With trees Tam had selected from their property, he constructed the timber frame and house, with help from Sue. In 1991, they moved in to what Sue calls their “work in progress.”

Along with continuing her work with the Forest Service, Sue has continued pursuing her artistic endeavors as well.

She had dabbled in photography and jewelry design in college and rekindled an affinity for fiber arts and weaving when her kids were little. (Her work has been showcased in Handwoven magazine.)

“First, think you can”

A member of the Clearwater Quilter’s group, Sue has presented programs on art quilting techniques, felting, and even drawing. Anytime she teaches, she says she drives home the message, “First, think you can.”

When Tam surprised her with a glass bead making kit, Sue began teaching herself the craft, reading everything she could and taking classes when possible. (Her lampwork beads have been purchased by jewelry artists in several states.)

She is also studying the art of faux finishing and has learned how to make her own wallpaper (the entryway in her home is covered in the handmade papers).

With an insatiable appetite to learn new things, Sue isn’t satisfied. She really wants to learn to paint – specifically, “fun portraits of children.”

Sue’s interest in drawing was first sparked years ago when Jessie was in grade school at Orofino Elementary School (OES) and Sue sat down one evening with one of her daughter’s school pictures and attempted to draw it. She surprised herself at how well she did.

With no art program at OES, Sue “began to look for ways to bring more art opportunities into the classrooms.” Inspired by drawing books written by Mona Brooks, Sue contacted her and was able to line up some workshops with one of Brooks’ trainees.
…
With her kids growing up, in 2001, Sue took on a “final” major OES project – the tile mosaic that flanks its main entrance. Involving all three sixth-grade classes, Sue says it took nine months to complete.

With a desire to continue teaching, Sue developed drawing classes, which she titled, “I Think I Can” and has taught ages ranging from kindergartners through senior citizens. An Idaho Commission on the Arts, Arts Education Program grant has allowed her to teach in surrounding communities.

As a Natural Resources Information Manager for the Forest Service, Sue continues to enjoy the challenge of her profession. She uses geographic information systems (GIS) and much of the focus of her job comes down to how things are laid out spatially across the forest. “I work with a great group of people and the time passes quickly,” says Sue.

Having recently celebrated their 25th wedding anniversary, Sue remains “extremely appreciative” of Tam, whom she says has “worked hard to build us a great home and family.” She admits, “I sometimes push a little extra with my creative projects but he’s there providing support when I need it.”

Sue is also proud of their kids.

Though she admits once worrying that as a “working mom” she “wasn’t passing on the many skills” she learned from her own mom and grandmother; Sue says “Interestingly enough, they are finding their own ways in the creative arts fields.”

According to Sue, Jessie is studying graphic design, Eyler is studying digital film production, and Shelby, a high school junior, is a “budding entrepreneur” who has already designed several web sites.
…
This weekend, Sue will participate in the annual Patchwork Bazaar held at Orofino High School. From a beginning many years ago selling fresh pressed cider with Tam and stained glass; this year, Sue will be selling her glass beads and jewelry.

With a new business called “Middle Maiden Arts,” she hopes to not only sell her wares but offer classes one day as well. Speaking of her varied interests, Sue explains, “For me, it’s about playing with color, pattern, texture and the sharing of how to do it.”